For a market nearing all-time highs, volatility remains curiously elevated. The message, in a slow news cycle like the one we’re currently in, could be that one tweet or statement has the chance to set things in a bad way quickly, especially considering how far the market has recently rallied.
The Cboe Volatility Index (VIX) did drop slightly early Tuesday, but stayed above 15.5. Compare that to where VIX was a couple of months ago at around 12, and it seems evident that VIX is hanging in there. It’s actually not too far under early June highs of 18. Typically, a stronger VIX is associated with falling stock prices, but the S&P 500 Index (SPX) closed Monday just 2% below its all-time high of 2954 and up 5% from recent lows.
Current volatility levels could signal that some investors might still want to set aside funds to deal with any possible return to risk fears. The trade situation remains uncertain, with threats of more tariffs against China still on the front page. Markets tend to shy from uncertainty.
Despite the volatility and the unresolved trade battle, the lights lit up green again on Wall Street in pre-market trading Tuesday, and the Dow Jones Industrial Average ($DJI) is up six days in a row. One thing to consider watching is whether the SPX can close above psychological resistance at 2900, a level it briefly eclipsed Monday before falling back.
Inflation data early Tuesday looked like a mixed bag. The headline Producer Price Index (PPI) for May rose 0.1%, in line with analysts’ estimates and down from 0.2% the previous month. That seems pretty benign.
However, a producer prices measure excluding food, energy and trade services rose a solid 0.4%. While that beat expectations, it reflected growth in the volatile services category, the Labor Department said, including prices of hotel rooms and hospital care. That could be a transient number, so we’ll see if it remains an issue in June.
The consumer price index for May is due out early tomorrow and likely to get a close look from investors for any signs of percolating inflation.

Another Helping of Risk

The “risk-off” mentality carried into the new week Monday, though stocks couldn’t keep up their solid early gains. Still, all the major indices finished higher, led by cyclical sectors like Info Tech, Consumer Discretionary and Financials. The strength in cyclicals could be partly due to current low rates and hopes for another rate cut in the coming weeks. Generally, so-called “growth” names tend to be more likely to borrow.
Meanwhile, some of the “defensive” sectors like Utilities and Staples finished flat to lower, and gold and Treasuries also began pulling back from recent highs. The 10-year U.S. Treasury yield, which looked like it might be ready to test 2% late last week, popped back up to 2.14% on Monday. That’s still way below the 2.68% level where it started the year, so it’s not like the economic uncertainty weighing on rates has gone away. It’s just a little more in the shadows.
With the bump in yields, Financials appeared to get a little more traction. We’re four weeks out from the start of earnings season, where Financials typically lead things off.
It’s easy to say this new risk-on sentiment is all about the suspension of threatened tariffs against Mexico and a more dovish-sounding Fed, and that likely accounts for a good portion of it. That said, the big merger and acquisition announcements over the weekend might also play a role, with some investors perhaps hoping for more. Companies have pretty much played out the stock buyback game. So if they can borrow money at a low interest rate and combine it with cash on hand, that could be a better use of capital for some firms. The Salesforce (CRM) deal to buy Tableau Software (DATA), for instance, adds a whole new area to CRM’s business.

Looking Ahead to Next Trade Talks

With the focus on M&A, tariffs took a back seat to start the week. However, it might be a quick drop back followed by a run up the middle. That’s because the G-20 summit in Japan looms at the end of June, and President Trump has threatened to slap tariffs on more Chinese goods if Chinese President Xi doesn’t attend. The countdown to this meeting could start making people nervous in coming weeks.
You can’t completely ignore trade, but in the long-term, earnings are what drive the market. It comes back to what’s really going on at the individual companies whose stocks long-term investors own. If you’re a long-term investor, what did the CEOs of your companies say in their last earnings conference calls? Did they mention tariffs? If they’re not worried about tariffs, then maybe it’s worth considering your own concerns. That’s not to say CEOs aren’t worried—many are. However, some companies could see far more impact than others.
For the long-term investor, it might be worth thinking about trying to ignore all the daily back-and-forth and staying with your long-term plan and time frame, unless something materially changes with any of the specific companies whose stock you might own.
Anyone trying to keep up with this market’s quick moves could get frustrated. A week ago, the Nasdaq (COMP) briefly had a 10% correction, and then rallied. Rebounds are coming more quickly than they used to. COMP continued to outpace other indices Monday, rising more than 1% as the semiconductor world had another strong day. Info Tech sector leaders Apple (AAPL) and Microsoft (MSFT) also had good days, as did Amazon (AMZN).

That doesn’t mean the skies are necessarily clear. Until there’s some resolution to the tariff situation, it’s conceivable that the market as a whole could continue to bounce back and forth in its current trading range between roughly 2750 and 2900 for the SPX. One interesting take-away Monday was the SPX’s failure to close above psychological resistance at the 2900 level after eclipsing it intraday. It looks like thin air above 2900, which the SPX has topped for brief periods twice in the last year only to quickly retreat.
Besides M&A, corporate news is a bit thin this week. We do get earnings from lululemon (LULU) after the close on Wednesday, however.
Fed news could also be sparse, with Fed officials now in the silent period ahead of next week’s Federal Open Market Committee (FOMC) meeting. Some analysts are projecting aggressive moves by the Fed to chop rates, but it’s informative that odds of a June Fed rate cut dwindled in the futures market after President Trump pulled immediate tariffs on Mexico off the table. The futures market is strongly implying a single 25-basis-point easing in July and two more before year-end.
Though many investors appear to view a possible rate cut as bullish, remember it would likely reflect the Fed sensing economic weakness. That’s why some analysts continue to be skeptical about this quick rebound in stocks amid soft data. 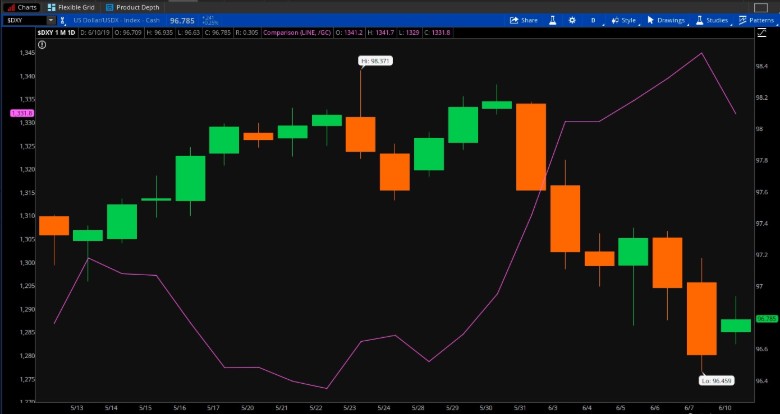 FIGURE 1:  RISK BUSINESS SLOWS: Both the dollar index (candlestick) and gold prices (purple line) have retreated slightly over the last few days from their recent highs as many investors seem more inclined to put money into “riskier” assets. Data Sources: ICE, CME Group. Chart source: The thinkorswim® platform from TD Ameritrade. For illustrative purposes only. Past performance does not guarantee future results.

Energy Dive: It can often be a warning sign of weakness in the economy when crude goes soft, the way it did for a couple of weeks before last week’s late rally. U.S. crude seems to be stabilizing above $53 a barrel, but that’s still well below the April high for the year of above $66 and last fall’s high above $76. It’s also not far above recent five-month lows just above $50.

There was an interesting graphic in USA Today last week showing renewables gaining on fossil fuels. This doesn’t necessarily have a huge impact on crude, considering crude still runs most of the world’s cars and trucks, not to mention that battery-powered planes don’t appear to be on anyone’s close horizon. However, the move to renewables for power generation could mean hard times for crude’s cousin, natural gas, as wind and solar are becoming more price-competitive vs. natural gas in the electricity markets. If you haven’t looked lately, natural gas futures are really struggling, with the front-month contract recently falling to a three-year low. Cheaper natural gas could give consumers a break as they cool their homes this summer, perhaps putting more money in their pockets for other purchases.

Believe It Or Not: Earnings Season Approaching: The start of Q2 earnings is just over a month away, but that doesn’t mean it’s too early to start thinking about what type of results companies might deliver. In Q1, S&P 500 earnings fell 0.4%, according to FactSet, the first quarterly decline since Q2 2016. On the plus side, 76% of companies came in above analysts’ earnings per share estimates, above the five-year average of 72%. Health Care was the best sector performer with 9% growth.

In a worrisome sign, 86 S&P 500 companies have issued negative EPS guidance for Q2. FactSet said. It’s still early, but S&P Global Market Intelligence says it sees Q2 EPS falling 1.1%. We’ll see if those estimates change, but the pattern in recent years is for companies to beat early analyst projections. If earnings fall two quarters in a row, we’ll have what’s called an “earnings recession” on our hands, something that hasn’t happened since the 2015/2016 timeframe.

Two of a Kind: Arguably the most important two data points this week come Wednesday and Friday with the consumer price index (CPI) for May and retail sales for May. If the soft jobs report and recent tepid manufacturing data reflect a slowing economy, one might expect similar softness to show up with the inflation and retail sales numbers. Analysts expect a 0.1% rise in headline CPI, according to Briefing.com, and a 0.2% rise in core CPI. Headline and core were 0.3% and 0.1%, respectively, in April. If numbers come in light, it could raise more concerns about consumer activity.

The same could be said for retail sales, which have fallen in two of the last three monthly reports. They were down 0.2% in April, but analysts expect a big May comeback with 0.7% growth, according to Briefing.com. Some of the pressure in the April report came from weak automobile sales, and excluding those, core retail sales actually rose slightly. However, the jobs report means consumer health is going to probably get a closer look, so any weakness in retail sales might have more market  impact than normal, especially on sectors like Consumer Discretionary and Info Tech.